I’ve been looking for a bluetooth speaker for awhile now. My use case is fairly limited, although I don’t think its particularly unique. There are several podcasts I like to listen to, but since I’m spoiled and have an incredibly short commute there aren’t many opportunities to listen to them. I’ve tried listening while I work, but I find for me that I either quit working as I’m focusing on the podcast, or I quit listening to the podcast as I’m focusing on work. The only real consistent time then that I have to listen to podcasts is during my morning shower.

I’ve tried several different small speakers, mostly battery powered and connected using a 3.5mm headphone cable. With varying levels of success. The problem almost universally however is that although they are loud enough when playing music, they just don’t have enough volume when playing podcasts. I have it on pretty good authority based on this review by Marco Arment that the Big Jambox by Jawbone would work well for me since my use case happens to be the same one that Marco was optimizing for. The only issue with the Big Jambox is its price. I’m hard pressed to justify spending that much money for a speaker that will predominantly live in my bathroom and be used for at most around thirty minutes a day.

A few weeks ago I came across an interesting little bluetooth speaker for sale at Woot. While the list price of $49.99 seemed too much for this oddly shaped speaker a sale price of $19.99 made it worth a shot. I missed out on the Woot sale, but it was available for almost the same price at Amazon, so thats where I picked up mine. 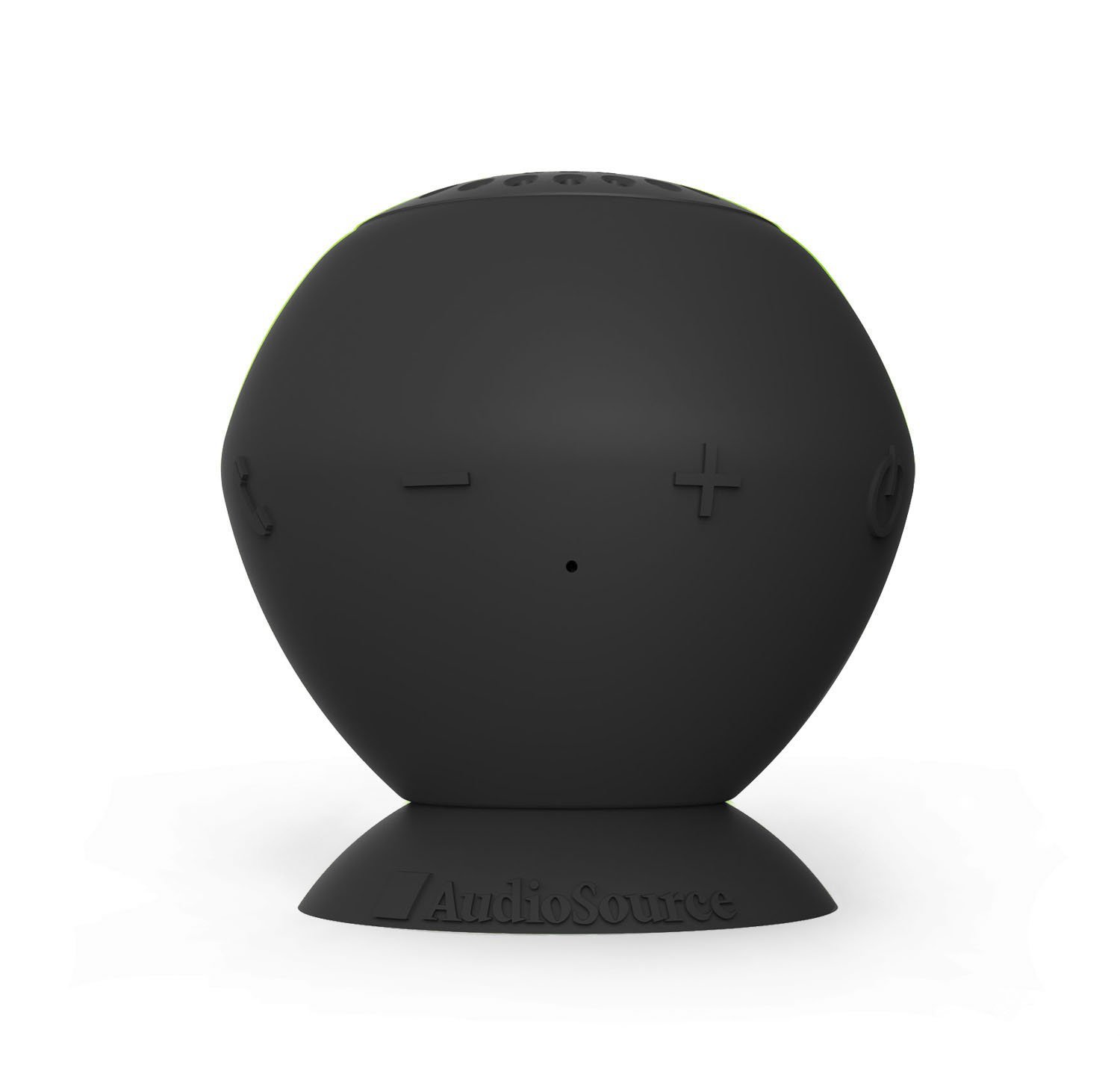 The key features of the Sound pOp are:

Most of these appealed specifically to my use case, and my hope was that even if it wasn’t loud enough on its own the ability to suction cup it directly to the wall in the shower would mean that it didn’t need to be as loud. Let’s go through those features one by one:

The bluetooth works as expected, it paired easily and quickly with my iPhone 5, iPad (1st gen), and Mac mini and it plays a distinct sound to let you know it paired successfully. Its range is about what I’ve noticed from other bluetooth devices, but it doesn’t work around corners particularly well (i.e. through multiple walls, directly through one wall works fine).

I haven’t placed it directly underneath the shower, but I have had it suction cupped to the wall in the shower with me, and at the end of the shower there is water dripping off of it. So far I haven’t noticed any drop off in quality although I do usually gently dry it off with a towel after the shower. The rubberized material the Sound pOp is made of did lead to an annoyance literally right out of the box. The entire device was covered in dust and lint, and I couldn’t wipe it off. Fortunately this was resolved after a single shower use and it hasn’t come up since. 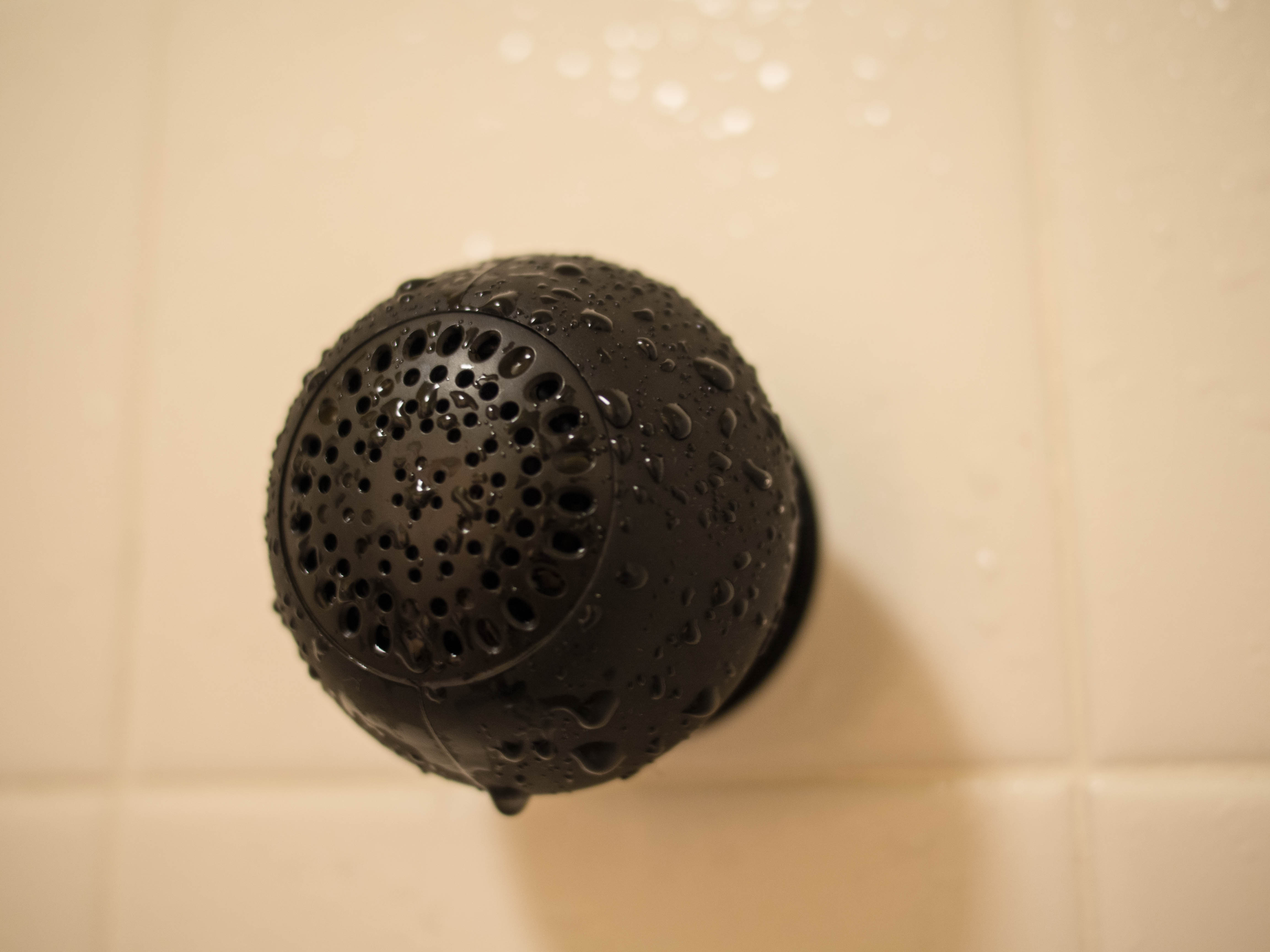 Other than the volume this was my biggest concern. Some of the forum posts I read about the Sound pOp said that the suction cup hadn’t worked very well. I’m happy to report that I haven’t once had the speaker lose its grip. I have taken it down off the wall after every shower, so it may be that if I left it up overnight it would fall, but I don’t see any point in leaving it stuck on the wall when its not being used and you will need to periodically plug it in to charge, which leads to the next feature:

In my usage - once a day for about thirty minutes - the battery lasted for a little over a week, which I’m pretty happy with. With that said after it died the first time I moved a power adapter into the bathroom and started plugging it in to charge whenever its not being used. It was really annoying to walk into the bathroom ready to listen to my podcasts only to realize it wouldn’t power on. I have also started using it to play soothing white noise for my four month old daughter and the first night we used it for that purpose I didn’t think about the battery and it died at around eight hours.

It came with a micro usb cable for charging and I’ve been using an old iPod wall charger which I happened to have in a drawer for charging. One really nice feature is that it can be used while its charging, so now it stays plugged in all night while its playing white noise for my daughter and it only comes off the charger when I’m using it in the shower. This probably isn’t good for the long term health of the battery, but considering its price and how I’m using it, I’m not real worried.

This was the one major feature that I wasn’t really interested in. Ironically the first time I used the Sound pOp a phone call came in. The podcast that was playing faded out and my ringtone faded in exactly as expected. Sadly I didn’t know who was calling and there is a very short list of people I would feel comfortable having a telephone conversation with while standing in the shower.1

So far everything has mostly worked as advertised, but there are a couple issues.

The final verdict is pretty straightforward:

If you’re looking for a budget bluetooth speaker and you can find this on sale for $20 (as of this writing its back up around $30 - $40 on Amazon) then I think you’ll be very happy.